Having been born in the late 1980’s, I have witnessed the height of Pinoy Rock Bands in all its glory. I grew up listening to the likes of Parokya ni Edgar, Rivermaya, Siakol (I know!), Sugarfree and of course Eraserheads. As cheesy at it may sound, but Eraserheads holds a special place in my heart.

Their songs were my salvation during my rebellious college days. In fact, “Alapaap” used to be my life anthem at that time when I was traversing a dark road and didn’t know where I was heading; when all I felt  was resentment, and anger, and doubt, and all I ever wanted to do was run away and escape reality. Yes, I was a hormonal, melodramatic teenager with a penchant for rock music.

I recently watched Ang Huling El Bimbo the Musical and let me tell you, my 17-year old self was an emotional wreck. As expected, it was definitely nostalgic, but more than that, the 3-hour show took me to a wild roller coaster ride; one that I did not expect, but was pleased to have experienced anyway.

Having said that, here are 5 reasons why you should watch Ang Huling El Bimbo….before it’s too late!

The Newport Performing Arts Theater at Resorts World Manila is a 1,500-seat theater featuring the biggest LED screen in Asia, providing a dynamic backdrop for shows and events. The revolving stage and state-of-the art digital audio make a world-class production worthy of a 3-hour sitting.

Nothing beats the original, that’s for sure. But to hear E-heads’ iconic songs with different interpretations, sung by the brightest theater actors and actresses of this generation gave a fresh and rather pleasing twist to the music we all love. I definitely enjoyed their version of “Pare Ko”, “Spoliarium” and “Wag Kang Matakot”. 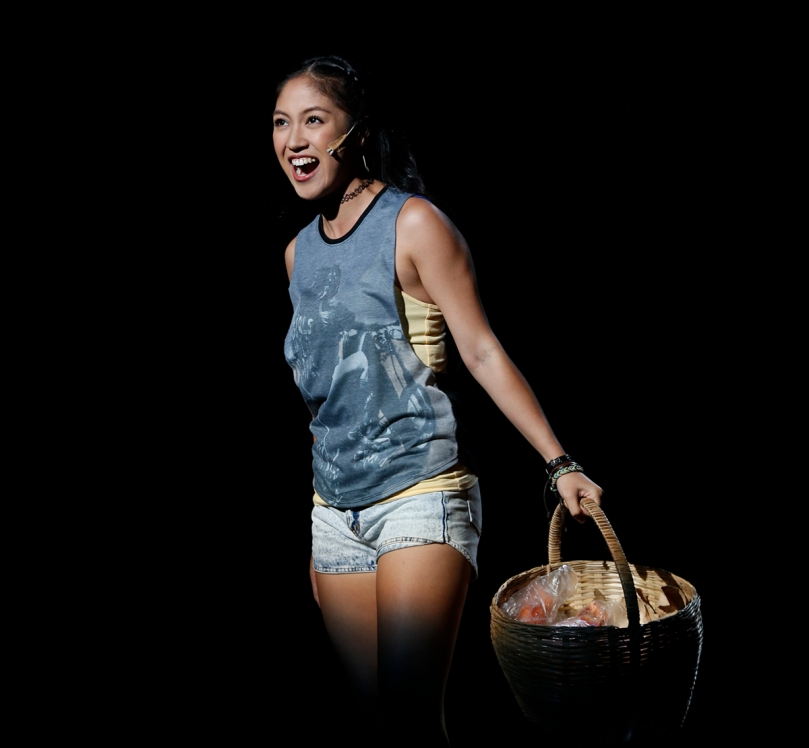 Props to Gab Pangilinan for her portrayal of the young female protagonist, as well as Nicco Manalo, Reb Atadero, and Lance Reblando for playing the young college trio.

4. A heartwarming yet heartbreaking story about love, loyalty, and friendship

The story took me by surprise. Sure, I knew it was going to be about four friends and their adventures (and misadventures) throughout their college life, but I found the story progression gripping and truly unexpected.

The first half of the show warmed my heart and it took me to a joy ride down the memory lane. But when the second half took an epic detour, I had to hold on to my seat, and the next thing I knew, I was already sobbing and feeling chills down my spine. Of course I won’t be spoiling the story for you. That’s for you to find out!

As soon as the cast took their final bow, I felt a surge of pride at the realization that I had just watched an original All-Filipino production, based on the songs of an iconic Pinoy Rock Band, and played by exceedingly talented Pinoy artists. It can’t get more Filipino than that. We should all be proud. I know I am.

Ang Huling El Bimbo is definitely one of the best musicals I’ve seen by far. If only I live in Manila, I wouldn’t mind watching it again and generously give my loudest applause to everyone who made this production possible, because they deserve it.

The second run of Ang Huling El Bimbo will be at the Newport Performing Arts theater until April 14, 2019. Go ahead and watch it if you can, because it is truly worth it.

Visit https://www.rwmanila.com/web/ang-huling-el-bimbo/  for schedules, tickets, and other inquiries.

Good morning, City of Strawberries! 🍓🍓🍓
Savoring the last few days of my holiday break and attempting to finally finish this book (which I started reading last September) before work resumes. Also, should I film a bookshelf tour / book collection video? 🎥🤔 #books #bookshelf #bookstagram #tattoistofauschwitz #historicalfiction #holocaust
Last day of work for 2019! Time to sign off and wind down!👩🏻‍💻🎉
The Swedish Art of Balanced Living ❤️
My therapy dogs ❤️🐶
One day at a time...
Felt cute. Might not delete later. 💁🏻‍♀️ . . . . . . . . . #baguiocity #cafebytheruins #travel #travelpinas #wanderpinas #throwbackthursday #photooftheday #davaobloggers #davaoinfluencer
Went out to look for ginangggang pero waley. So picture nlng! 😂 . . 📸 @punk_queen90 . . #lazysunday #photooftheday #igersdavao #davaobloggers
Kick off the Kadayawan celebration at the PLDT #FibrKadayawanExperience Hub at Sta. Ana Garden Park. Take pictures at their colorful photo wall and play games for a chance to win exclusive prizes. #PLDThomeFibr #DavaoBloggers #DBStheBEST #DBSBestDays
Back to top
%d bloggers like this: